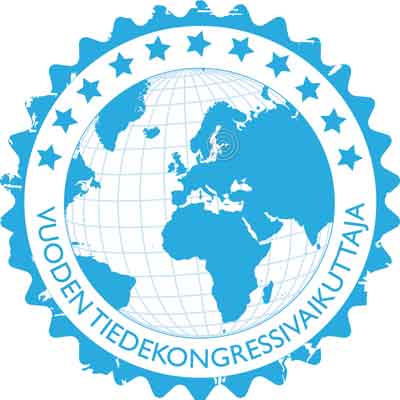 This year’s Scientific Conference Power Player prize was awarded to Docent Pia Siljander from the University of Helsinki. She was awarded for her efforts to promote the organisation of international scientific conferences in Finland. The EUR 5000 award was donated by the Finnish Fair Foundation.

Docent Pia Siljander works as a University Lecturer in the Biochemistry Of Health in the Faculty of Biological and Environmental Sciences at the University of Helsinki. She has helped organise seminars and conferences related to her field of research, including the 5th MEMBREC symposium: Extracellular vesicles and MC and WG meetings of EU COST Action BM1202 ”Microvesicles and exosomes in health and disease”.

“Organising a conference is both challenging and rewarding. The arrangements require excellent cooperation and systematic planning. I have always been lucky in having both new and enthusiastic as well as more experienced organisers on board, in addition to support from the Federation of Finnish Learned Societies, among others. This will allow us to continue the MEMBREC meetings series this autumn at the University of Helsinki, for example, thanks to the efforts of new volunteer organisers,” Siljander rejoices.

The prizewinner was selected by the Federation of Finnish Learned Societies.

“The Scientific Conference Power Player prize is awarded to individuals who have made a positive contribution to Finland’s role in international scientific activities and who have successfully petitioned for international conferences to be arranged in Finland. It is a reward for contributing to the positive image of the discipline in question and acting as a promising figure within it. University Lecturer Pia Siljander fulfils all of these criteria,” comments Lea Ryynänen-Karjalainen, citing the grounds for the selection.

The prize was presented during the PromoExpo and Yritys2017 events at Messukeskus Helsinki on 5–6 September 2017. The competition for the 2018 Scientific Power Player award will be launched in January.

The Federation of Finnish Learned Societies comprises four scientific academies and 274 societies from all branches of the arts and sciences. The Federation is responsible for distributing state subsidies for organising conferences (approximately €800,000 per year).

Every year, the Finnish Fair Foundation awards prizes, scholarships and rewards worth approximately €400,000 in total. The best-known prizes include the Kaj Franck Design Prize, the Habitare Design Award, the For Love of the Book Award and the Young Designer of the Year Award. www.messusäätiö.fi, #messusäätiö

Further information on the prize:

The economic impact of Messukeskus Helsinki melted by 80 per cent, pandemic damage radiates over the business life of the entire Helsinki Metropolitan Area