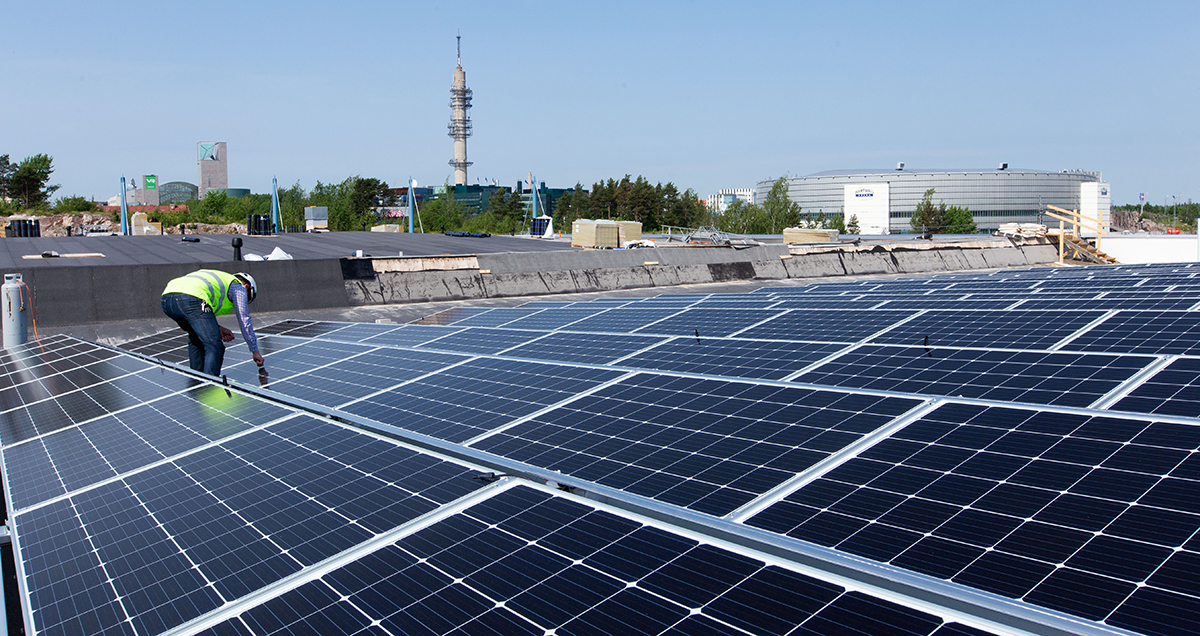 The solar power plant will increase the energy efficiency of the expo and convention centre and strengthen the share of solar power in Helen’s production. The 1,589 solar panels of the plant have been installed on the roofs of halls 4 and 5 of the centre this summer. Estimated annual production in the initial stage is 445 MWh, which corresponds to the annual consumption of more than two hundred one-bedroom flats.

By the end of the year, about 300 more panels will be installed. Once the extension has been completed, the annual output of the solar power plant will exceed 530 megawatt-hours.

Helen will offer the panels of the Messukeskus solar power plant for its customers to rent with the popular designated panel principle.

“Almost two-thirds of the solar panels in Messukeskus have already been leased. The designated panel concept developed by Helen is an effortless way to start producing solar energy: everyone can use renewable solar energy by renting a solar panel. Helen leases out the panels in Messukeskus to its customers for a monthly fee of 4.40 euros, and the electricity generated by the designated panel is refunded on the electricity bill,” says Helen’s Product Group Manager Riku Kuikka.

“The objective of our environmental work is to be a 110% carbon-neutral event venue in 2029. We strive towards this target by reducing energy use, increasing the share of renewable energy and utilising carbon-neutral alternatives. The solar power plant will increase the share of renewable energy and decrease the cooling need of our premises as the solar panels also have a shading effect,” says Managing Director Anni Vepsäläinen.

“We are glad that we were able to implement the solar power plant consisting of designated panels on the roof of Messukeskus. Helen aims for carbon-neutral energy production, and it is achieved together with the customers,” says Helen’s Director Marko Riipinen.

Last autumn, Messukeskus joined the Climate Partners network between the City of Helsinki and businesses. The objective of the network is a carbon-neutral Helsinki. The environmental work of Messukeskus includes 99% waste recovery and the utilisation of the latest building technology, for example, the use of geothermal heat, district cooling, heat recovery and the use of LED technology. Messukeskus has also reduced the use of single-use products and significantly increased the provision of services for drivers of electric vehicles.

Photos from the Messukeskus mediabank: https://mediabank.messukeskus.com/kuvat/Messukeskus/Aurinkovoimala+%7C+Solar+power+plant/