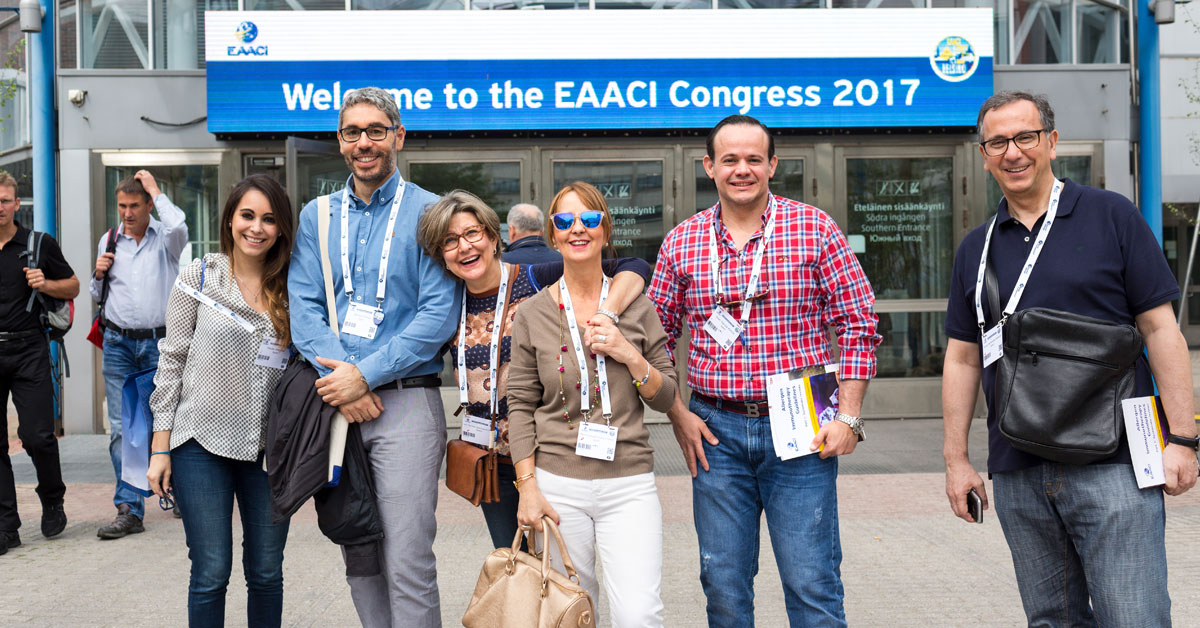 EAACI, the world’s largest allergology congress was organised at Messukeskus Helsinki in 2017.

Professor of dermatology and allergology Antti Lauerma and professor of paediatric allergology Mika Mäkelä have won the first Physician & Congress (Lääkäri & Kongressi) prize. The new annual award recognises doctors who have successfully brought congresses in their own area of expertise to Finland. The prize of EUR 5,000 is donated by the Finnish Fair Foundation. The prize was given at the Doctor, The Finnish Medical Convention and Exhibition, at Messukeskus Helsinki, Expo and Convention Centre.

“Holding an international medical congress in Finland almost always requires the efforts of an enthusiastic and talented local physician. The best clinical scientists in their field also work as specialists, combining the most recent research evidence with deep clinical knowledge, which is best for patients. Finnish expertise also provides assurance to international medical organisations when choosing Finland as a location for international congresses. The Finnish Fair Foundation wants to recognise these efforts”, says training manager Juha Pekka Turunen of the Finnish medical society Duodecim. Turunen was a member of the award committee.

“The work of Antti Lauerma and Mika Mäkelä is a fine display of Finnish determination and close collaboration between Finnish physicians. Efforts had been made to bring the EAACI congress to Finland several times over a 15-year period. Thanks to the congress, Finland and its high level of medical expertise gained great visibility in the year that also marked the centenary of Finnish independence”, says Turunen.

“Bringing a specialised congress to Finland requires long-term hard work in international forums. It is extremely rewarding to see the end result after arranging a top-level congress in such excellent facilities as those offered by Messukeskus, and in our hometown of Helsinki. Positive feedback came from friends and colleagues around the world, which was the best reward of all. The recognition now granted by the Finnish Fair Foundation is significant for us. It is an acknowledgement of the excellent cooperation with Messukeskus and the City of Helsinki, which made it possible to hold the congress here.  I hope that this prize will inspire our medical colleagues in Finland to arrange congresses in their own field”, says Mäkelä.

“The EAACI congress is the world’s largest allergology congress, with participants from over 100 countries. It was a great privilege to organise it in Finland, and it was a fine tribute to the ground-breaking allergy research being carried out in Finland. Applying for the congress to be held in Finland required major efforts over a long period, but the support of Messukeskus and the City of Helsinki made the application process easier. It was great to be able to showcase Finnish excellence in an international environment, which also made a lasting impression on the organisation. Above all, the delegates who participated in the congress were impressed and enthusiastic about Helsinki as a congress location. I warmly encourage all our colleagues to bring a conference in their own field to Finland”, says Lauerma.

The EAACI congress achieved a visitor record with the congress, which attracted more than 8,000 delegates from approximately 100 countries to Helsinki. Holding the congress in Helsinki generated around 12 million euros in revenue for the capital region. More than a hundred professionals were responsible for the practical arrangements of the conference, as the congress programme required audiovisual technology, restaurant services, exhibition designers and builders, guide planning, security expertise, and more.

Messukeskus organises or hosts around 1,500 meetings and congresses annually and has become especially known for its major international scientific and organisational conventions, some of which attract thousands of participants. Due to their positive economic impact in the host city, there is stiff international competition for conferences.

“There is heavy demand for congresses these days, because alongside digitalisation it is extremely important to be able to meet face to face. We at Messukeskus work hard to arrange events, but we cannot succeed alone. Our superb facilities would remain empty if we did not work closely with scientific communities, companies and the City of Helsinki. We want to continue this collaboration. We are not only selling Messukeskus to visitors – we are also selling Helsinki and Finland as a whole”, says congress manager Paula Blomster of Messukeskus.

The next Physician & Congress prize will be awarded in a year’s time. It will be awarded for international medical congresses held in the 2016–2020 period. The winners are chosen by an award committee consisting of medical and event experts. Proposals for nominees can be submitted using a form available at https://messukeskus.com/laakari-kongressi-palkinto (in Finnish).